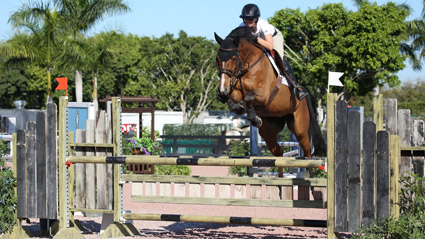 Amy was born into show jumping.  She began her Grand Prix career at 19 and hasn’t looked back.  In 2015, Amy began competing with her current equine partner, the Belgian Warmblood gelding Heros. The pair were Canada’s top performers at the 2016 Nations Cup in Ocala, Florida as well as members of the third-place finishing BMO Nations Cup team during the Spruce Meadows ‘Masters’ Tournament in September. One month earlier in August, Amy followed in her father’s footsteps making her making her Olympic Olympic debut at the 2016 Rio Olympic Games where she and Heros were part of Canada’s fourth place finish in the team event, in a jump-off for bronze against Germany.  Today, Amy works alongside her father, brother, and sister-in-law at the family’s Millar Brooke Farm in Perth, Ontario where she trains her own mounts and coaches the many students that form Team Millar.

Amy has been the primary rider for three of Schneiders show jumpers.  The horses include Dolittle, Finley and Esca Drille.  Dolittle was sold to the young Canadian show jumping rider, Breana Zielonka, who continues to compete the horse (registered name Darino Z -  Carthino Z x Libero H from the dam, Legina.)  Esca Drille is now competing in California. Finley is being brought along and is expected to make his 1.45m debut during the 2018-2019 season. 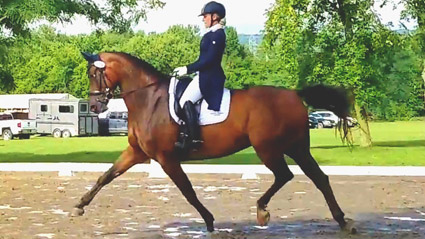 Courtney is Schneiders Sporthorses senior dressage rider.  Growing up in New York, she began riding horses just about the same time she began to walk.   Early mornings, before the school day would start, she would be working with the animals to which she’s  dedicated her life’s work.

Courtney has been comprensively honing her skills over the past decade by riding with Henk van Bergen and Lars Petersen on a regular basis while also taking advantage of opportunities to ride with other, internationally acclaimed trainers.  Recently, Courtney developed a regular working relationship with rider and trainer, Scott Hassler.  Scott, widely known for his expertise with young horses, is assisting Courtney as she develops our dressage horses.

Schneiders Sporthorses dressage horses -  six-year old KWPN mare, Tessa (Helvetia - Astrix x Painted Black), eight-year old KWPN gelding, Red (For Treasure RG - Vivaldi x Nairobi) and nine-year old Hanoverian gelding, Deme (Demetrius - Dancier x Don Bosco) are all being trained and ridden by Courtney. In addition, she has worked with our oldest competitor, seventeen-year old Hanoverian gelding, Rigger (Reel Adventure - Rotspon x Lanthan) who is now under full-time lease to Courtney’s talented adult student, Christina Dochertmann.  Courtney also brought the Welsh Pony, Benny (Madoc Prince Phillip by Churchill Chimes from the mare Trevallion Lady Diana), back to his dressage roots after spending more than two years in California with a young rider whose sole ambition was to be a show jumper.  Benny is now with a new family where he is serving as a schoolmaster for four young children. 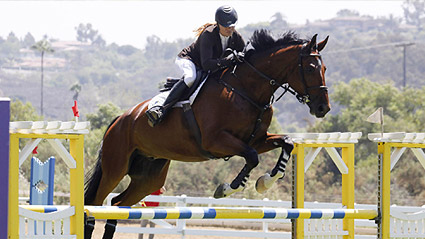 Carolin got a very early start into the world of horses being born into a family that owned racehorses in Sweden, where she first began her love affair with these magnificent animals.  She competed in all three disciplines - dressage, show jumping and eventing and was a member of the elite national pony team. In addition, she worked at a breeding farm learning the intricacies of breeding as well as  how to handle foals and start young horses.  In Sweden she was given the opportunity to work with some of the country's top trainers including handling and riding the Holsteiner stallion, Landlord.  After relocating to the United Stats nearly twenty years ago, she initially found work at the race tracks exercising thoroughbreds before moving to California.  In California after working as an assistant in two barns riding hunters and jumpers, she opened her CM Stables.

While motherhood took her away from high level competition for a period (Carolin now enjoys the company of two young sons who are a fixture at the Paddock Riding Club where CM Stables is located) she never gave up her dream of competing at the highest levels with top horses. Nonetheless, for several years, CM Stables focused on its lesson program and a small number of developing horses including the occasional rescue/rehabilation  project.

In 2017, in partnership with Schneiders Sporthorses, she returned to high level competitive riding.  Carolin trains regularly with Brazilian Olympian, Rodrigo Pessoa and United States Olympic Gold Medalist, Will Simpson. Carolin is dedicated to developing some of Schneiders Sporthorses younger horses as they come under saddle. 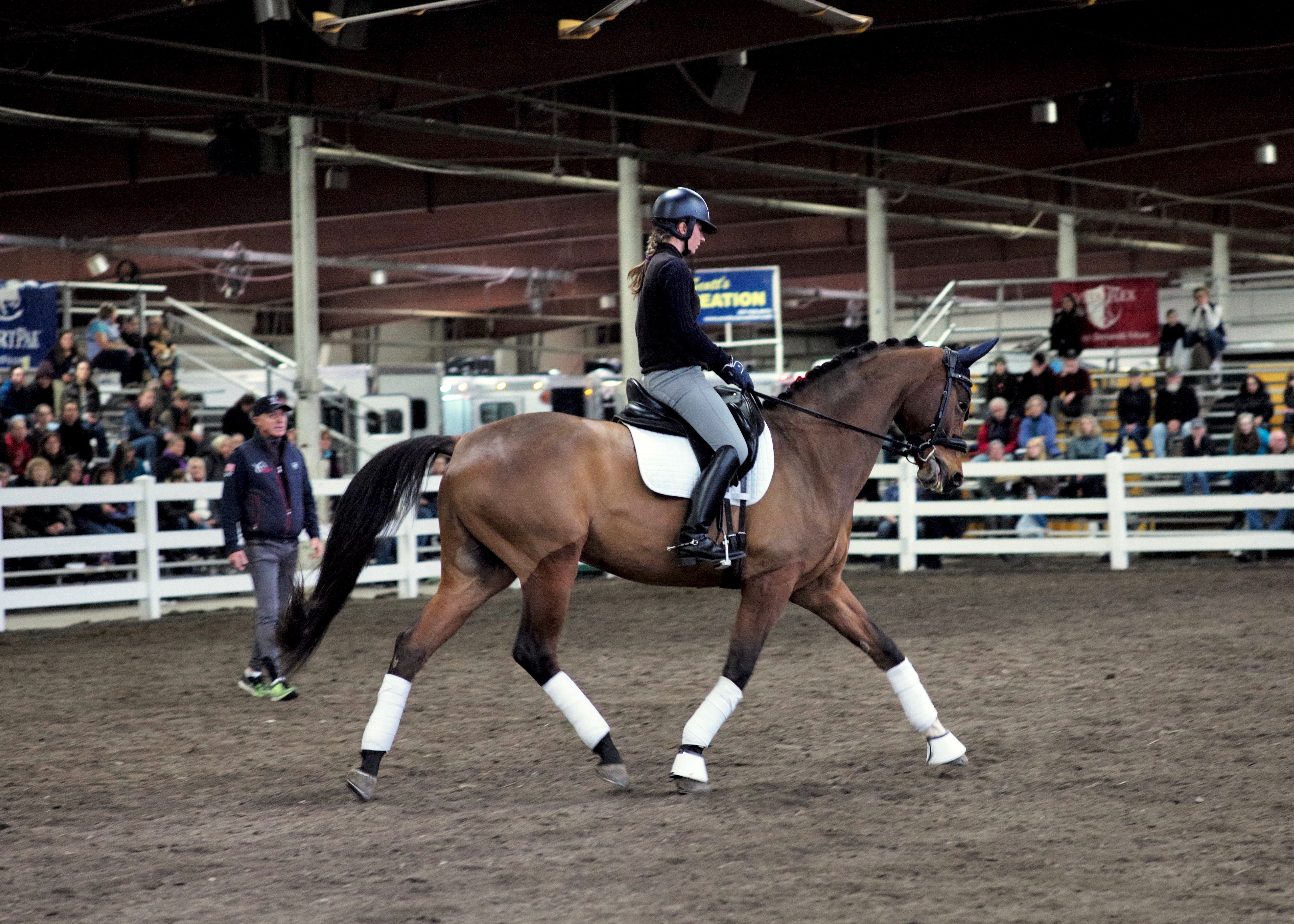 Leslie Ann McGowan is an FEI level dressage rider with rich experience for a young rider already holding a USDF Silver Medal. From an early age she was committed to perfect both her
skills as a rider and horsewoman. Leslie Ann is the owner of Double A
Equestrians, which focuses on dressage and eventing. Leslie Ann has
competed through the Grand Prix level in dressage and through Training
level eventing on multiple horses. She currently trains with Olympic
team rider Jan Ebeling and has worked with many well known trainers
including Dutch Olympic coach Henk van Bergen and Event rider Eric
Horgan. Leslie Ann also incorporates the Spanish Vaquero methods of Buck
Brannaman, Ray Hunt and Kip Fladland, using techniques that build
respect and trust as well as a soft feel.

In the past few years Leslie Ann has finished in the top 5 at the USDF Region 8 Championships
at 1st, 2nd, 3rd and Prix St. Georges levels. She also has consistently
placed in the top 3 with her Training level eventing mare. In 2016 she
competed in the U25 Grand Prix and in 2017 placed 8th in the USDF
Nationals for 1st level.
She has a B.S. degree in Equine Management from The University of New
Hampshire and completed the USEF/USDF Young Rider Graduate Program as
well as attending the USDF Trainers conferences in Wellington, FL. She
also coaches the Oyster River High School Equestrian team which competes
throughout the state of New Hampshire earning several championship
titles.

Leslie Ann operates Double A Equestrians at her family’s farm in Durham,
NH teaching dressage and eventing as well as training horses. She
spends the winter months training with Jan Ebeling and competing on the
Florida circuit. 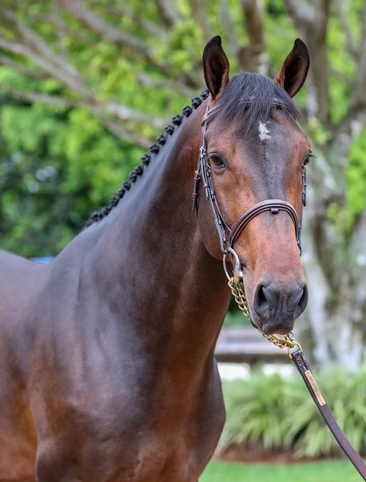 Niels is the owner of Stal Nanning in Dalfsen, NL where he recently took over complete control from his father, Daan Nanning, a well-know breeder and trainer in the Netherlands.  The Nanning’s have been Schneiders Sporthorses principal source for high potential show jumpers.  Niels currently has Fanlac in training with him.  Also, the young horse, High Five is owned in equal shares by Stal Nanning and Schneiders Sporthorses. 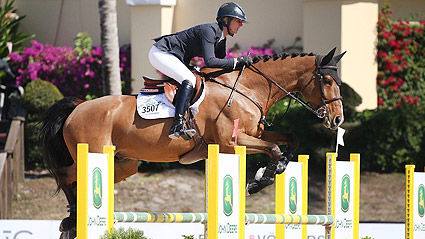 Competing as a professional, Kelly works full-time as the manager of Millar Brooke Farm. She continues to ride for her family’s farm, Bridge Brook Arms, founded by her parents, Mary Christine and Robert Soleau, with bases in Connecticut and Wellington, FL.  In December of 2015, Kelly married her long-time partner, Jonathon Millar in Key West, Florida.   Kelly has been on-board Esca Drille and Finley as essential part of the Millar Brooke Farm Team developing horses from Schneiders Sporthorses.